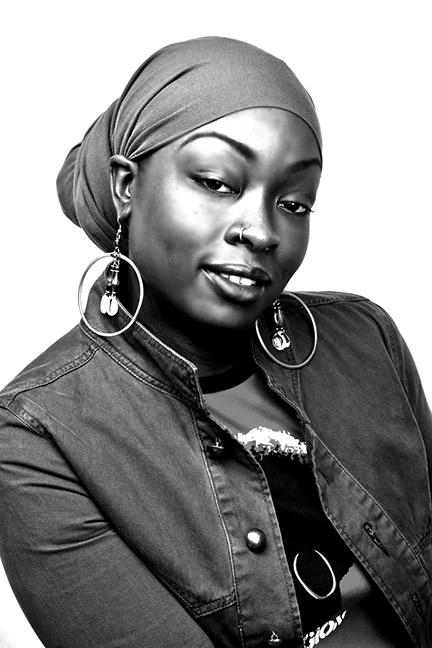 Welcome to Cover Me Chic, a home for modest women who want to make their own clothes. I’m Zahiyya (pronounced Zah-hee-yah). I’m a designer and serial entrepreneur. Over the past 22 years I’ve worked in the NYC fashion Industry – but my next journey is just beginning.

So let me guess… You want to dress modestly, but traditional ‘modest clothes’ look frumpy on you and isn’t your style. They have no shape, no personality and just aren’t you. You want clothes that fit you without being super tight but are tailored to your body. And let’s face it, everyone is wearing The. Same. Thing. Which is definitely not how you roll.

You often feel like you don’t fit in anywhere. You’re too reserved for your everyday life, but not as extreme and traditional as the community you belong to or grew up in.

I know, because that’s me. Or at least it was until I began owning my style and making my own clothes. Don’t get me wrong, my style has changed a lot since I first began sewing in elementary school, but at every phase my skills improved, and I grew more confident with myself and my abilities.

The purpose of Cover Me Chic

The purpose of CMC is to help women feel confident in their own skin.    Dressing well, is a large component of feeling good, which makes you look good. Not the other way around.

I teach sewing and pattern making so you learn how to dress the body you have in the most flattering way possible. I design patterns meant to make a statement, not to blend into what is traditional or expected.

You are meant to be seen and heard so do it dressed fabulously! Make modest fashion look fabulous on you!

What you will find here:

Bio (A brief switch into the third person…)

Cover Me Chic was founded by Zahiyya Abdul-Karim. She is a Designer and serial entrepreneur. Over the past 22 years Zahiyya has worked in the NYC fashion Industry building millions in revenue for design firms, also sewing and designing for private clients.

Here are what some of her clients had to say:

After 10 years I still wear a soft yellow cotton skirt, a 3-piece wool outfit (skirt, shell top and 3/4 length jacket), and a cotton velveteen overgarment trimmed with decorative braiding from Zahiyya. The skirt was bought ready-made; the other two garments she designed and executed with my fabric after I told her what I wanted. I get a compliment each time I wear them. That says a lot about Zahiyya's design sense and the quality of her work. I was taught to sew by some top-notch dressmakers, and when I shop for clothing, I look inside to see how well or poorly the garment is put together. Zahiyya garments pass my test!
Halima TouréEducator
I love who I am and all my curves. I will not change me to fit into a dress but I will change a dress to fit me. So for those special occasions Zahiyya is the one I call to create an outfit that let's me be the best me I can be.
Juwariya MohammadArchitect
Zahiyya has mastered the delicate balance of producing appropriate clothing for the modern Muslim woman. She is my go to designer for Eid outfits and special occasions because she understands how to flatter my curves while looking fashion forward.
Nura Abdur-Rahman
I have had a few custom garments made by Zahiyya and I must say I have been extended better customer service than I would expect in Neiman Marcus or Saks. She took the time to understand my needs and desires and didn't stop until my clothing fit perfectly. Her attention to detail and awareness of the female body really makes me a true believer in her talents. I highly recommend her services to all those looking for fabulous high quality clothing at affordable prices.
Nasiba Abdul-KarimMPH, PHD
I enjoyed every step of my experience working with Zahiyya. She was there through every stage of the process from helping me decide what would be most flattering silhouette, to choosing fabrics, to putting on finishing touches the day of. Zahiyya was resourceful, supportive, and had great vision. I wanted a dress that was graceful and unique, with a hint of drama. She was able to translate what I wanted into a beautiful polished finished product. This was my wedding reception, one of the most memorable days of my life. I couldn't have trusted a more qualified or more compassionate designer with such an important day.
Samira RamelizeOwner, Hyphens & Spaces
Previous
Next

Growing up Muslim, Zahiyya started sewing in elementary school because she didn’t like the options she had for modest clothes. She learned how to sew from her mother and father, yes, her father had his own sewing machine which she wasn’t allowed to touch until later on when her skills improved.

She loved it. She got really good fast by making clothes for herself and her six siblings every Eid. Eventually, she began sewing for other people in her family and community, making sewing her first business.

By high school, where she studied fine art, she landed a job at Harlem Textile works where she learned business, textile design and screen printing. That experience sparked her interest in entrepreneurship.

Zahiyya studied fashion design in college and soon after got her first job in the New York fashion Industry. While working as an Assistant Designer, she started her second business, a t-shirt company, in 1998. She sold her wares by vending at street fares and trade shows throughout the city on the weekends. Recognizing she needed a home base and not wanting to own a storefront, she learned web design and built her first website (when dial-up was still a thing) to promote and sell her designs.

Fast forward to 2014 she started her third business, Paradigm Squared LLC., which builds websites and online branding for individuals and small business.

Her fashion and textile designs have been featured in various publications including The New York Times, Huffington Post, Aziza Magazine, Sew News and the Philadelphia Enquirer among others.

When Zahiyya is not sewing and designing clothes, building brands, or creating websites she can be found tending her many plants, reading, sipping coffee or hanging out with her two daughters, husband and family.

I see you’ve read all the way to the bottom, I knew I liked you! While you’re here sign-up and get my free how to measure your body tool kit.

If you have questions or just want to say hey, contact me here.

Or you can connect with me on social:

Get your FREE maxi circle skirt downloads. Just tell us who to send it to by filling in the info below.

Get your FREE Puff Sleeve Tunic Measurement Worksheet. Just tell us who to send it to by filling in the info below.

Get your FREE maxi wrap dress downloads. Just tell us who to send it to by filling in the info below.

Get your FREE fitted face mask pattern. Just tell us who to send it to by filling in the info below.

Get your FREE kids fitted face mask pattern. Just tell us who to send it to by filling in the info below.

Get your FREE how to measure your body tool kit. Use it to take measurements for yourself or your clients!

Scroll to Top
We use cookies to ensure that we give you the best experience on our website. If you continue to use this site we will assume that you are happy with it.AcceptPrivacy Policy